Beyond the Borders of the GDR 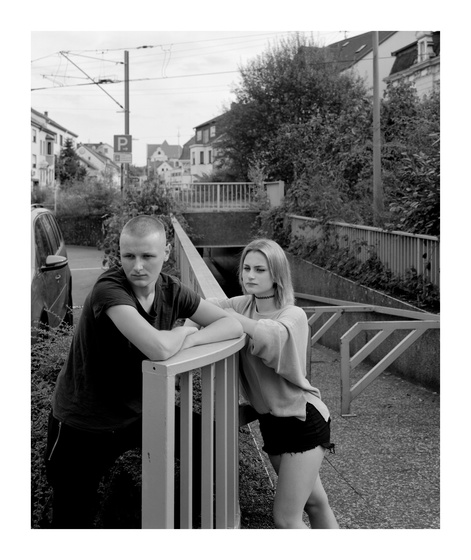 Beyond the Borders of the GDR

German photographers and partners Ute Mahler (b. 1949) and Werner Mahler (b. 1950) look at the lives of people. Not at global stars, or at the great glamorous or dramatic moments in a human life; they observe ordinary people living their lives in sleepy suburbs and forgotten working-class neighbourhoods. Through the Mahlers’ lens, these people, these lives become extraordinary. Like the young women they affectionately dubbed the Mona Lisas of the Suburbs, after Da Vinci’s Mona Lisa, in their 2009-2011 series of portraits. But a photograph of a houseplant struggling towards the light through a Venetian blind has an equally extraordinary, almost human quality. The Hague Museum of Photography is showing a selection of the couple’s work produced during careers spanning almost fifty years, from their first solo work in Germany during the GDR period to their more recent collaborative work. Their latest series Kleinstadt (Small Town) features prominently in the exhibition.

‘Do not create a situation, recognise and interpret the situation’, is the credo of Ute Mahler and Werner Mahler. They both grew up in the former German Democratic Republic (GDR, 1949-1990) and were key figures on the East German photography scene. They share a humanistic vision of the world that is a key feature of both their individual and their intensive joint photographic projects.

Ute and Werner have known each other since they were at high school and they both went on to study photography at the Hochschule für Grafik und Buchkunst art academy in Leipzig in the 1970s. Ute began her career as a freelance fashion photographer in 1974, working for Sibylle magazine. Werner began as a freelance advertising and fashion photographer for Sibylle and Für Dich. After the fall of the Berlin wall Ute Mahler and Werner Mahler and a number of other photographers set up the successful Ostkreuz photographic agency, and were also instrumental in the establishment of the Ostkreuzschule, one of Germany’s leading specialist photography colleges in.

For thirty years these two photographers each built their own individual body of work. Their first ‘official’ joint project was Mona Lisas of the Suburbs in 2009-2011, a series of portraits of young women in various suburbs in Europe. This was followed by a project exploring the scars left by the division of Germany called Where the World Came to an End (2010-2012) and the series Strange Days (2010-2014), about discovering the unexpected in familiar places.

Their most recent joint series Kleinstadt (2015-2018) portrays life in German provincial towns. This large-scale documentary project can be seen as a summary of their individual bodies of work and is the highlight of their wide-ranging careers to date. Ute Mahler & Werner Mahler – Beyond the Borders of the GDR shows a selection from the oeuvres of two remarkable characters in post-war German photography. This is the first major retrospective of their work in the Netherlands, covering the period from the early 1970s to the present day. Besides socially critical reportages, it also includes portraits and landscapes, including Ute’s portraits of Nina Hagen and Angela Merkel. Some of the work was commissioned, other images have never been published or were produced autonomously. The exhibition has been organised in close collaboration with Haus der Photographie / Deichtorhallen Hamburg.