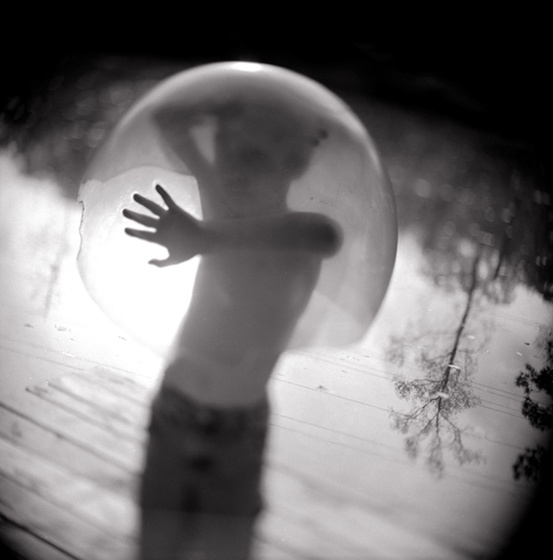 While everyone outside is relaxing in the sun, the atmosphere inside the museum is quiet and contemplative. The more than 120 photographs, drawings and collages on exhibition are pervaded by a mood of poetic resignation, either inspired by the subject (remote islands, deserted villages and solitary people) or deliberately evoked by the artist (distorted portraits/self-portraits and sombre still lifes). This exhibition suggests that the yearning for paradise – for an ideal world – is doomed to failure.

The artists participating in it refuse to be blinded by false myths and heroic gestures; they use the absence of any prospect of paradise to discover an almost heavenly beauty in apparently insignificant everyday sights and events. Italian artist Cesare Bedognè (b. 1968) uses his photography as a “magnifying glass for the soul”. After meeting his Dutch partner Monique, he moved to the Netherlands, where she died in 1998. Since then he moves back to Italy and started working on his Broken Images series, in which many of the images feature landscapes seen through broken windows. Photographer Keith Carter (b. 1948) from Wisconsin is the oldest and most celebrated artist participating in Empty Paradise. Although he often works in Europe, his work is almost unknown here. His atmospheric photos – mainly pictures of landscapes, animals and children – are endowed with a mysteriously timeless quality by their narrative power and poetic simplicity. Laurence Demaison (b. 1965) is often mentioned in the same breath as people like Francesca Woodman and Cindy Sherman – photographers who have likewise chosen to focus on the representation of their own female bodies. Demaison goes a step further: in search of her own identity, she distorts and contorts the image of her own body and eventually makes it disappear completely. Twins Ani and Nare Eloyan (b. 1988) live in The Hague and are currently studying respectively at the Rietveld Academy in Amsterdam and the Royal Academy of Art (KABK) in The Hague. For this show, they have worked independently on two separate installations. Each consists of a wall covered with texts, drawings, paintings and photographs. Ani’s contribution revolves around a series of photographs called The Artist: a self-portrait which is not necessarily all about herself, but rather about the cliché of the suffering artist. Nare’s installation is composed of 21 drawings, paintings and photographs and represents her own inner world: a world which is both personal and universal. Belgian photographer Brigitte Grignet (b. 1968) lives in New York but works as a news photographer worldwide. Her from 2002 till now ongoing Chiloé: La Cruz del Sur series shows a remote peninsula in the south of Chile. As a result of its isolation, the place has developed its own mythology and culture, mainly linked to the battle between land and sea. Finnish artist Arja Hyytiäinen (b. 1974) is exhibiting her autobiographical series Journey, which she says is basically about ‘keeping track of time’. Because her life has been one of constant change, Hyytiäinen is aware that there are different ways of looking at life. The full title of the series – Journey (Europe – a scenario) – bears witness to this. Géraldine Jeanjean (b. 1978) was born in the Netherlands but has French parents. Her grandmother lived in the most sparsely populated part of France, in a village called Aumont. Over a period of four years, Jeanjean took a series of photographs of the village and its inhabitants, focusing mainly on the deadness and desolation of the place. A book about this project is due to appear during the period of the exhibition. Eke Kriek (b. 1981) studied at the Royal Academy of Art (KABK) in The Hague; her work is a combination of photography, video and animation. She looks for ‘the split second when people are tired, miss a beat, then pick up the rhythm and go on again’. In Empty Paradise, she is exhibiting three still lifes and her video triptych Nothing Ever Happens (2006). Hague artist Ingmar Lemmens (b. 1967) used to disapprove of the digital manipulation of images but just four years ago discovered the potential of this new technology. The results are weird self-portraits and other manipulated photos, generally using images plucked from the internet. Although Lemmens has never taken part in an exhibition before, his photos can be found on dozens of internet forums. For her 2006 Point de Vue series, Spanish artist Anna Malagrida (b. 1970) photographed the dusty or whitewashed windows of an empty institutional building on the Franco-Spanish border. Passers-by have scribbled graffiti in the dust, but it still conceals what lies beyond. Igor Malijevský (b. 1970) comes from Prague and is a poet and musician as well as a photographer. His pictures focus on the tension between the real and the surreal. His series entitled The Signs is composed of 100 black-and-white pictures taken in cities like Berlin, Warsaw, Sofia and Budapest. Bart Julius Peters (b. 1971) photographs scenes which seem familiar yet remote; timeless but also part of a lost world. The Amsterdam-based photographer records people and places in a way that makes it seem as if he is part of their world. Indian artist Gayatri Subramanian (b. 1972) trained as a painter but is here exhibiting a series of intimate photographs of moments, people and places taken within a single house. The suggestion that the images are plucked from private life makes them seem mysterious and abstract, reminiscent of the family snapshots we keep in our own shoeboxes and purses.