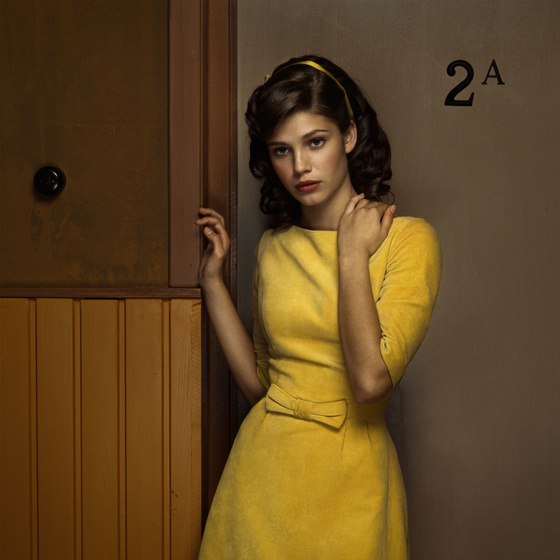 With their averted eyes half open, staring into nothingness, the models in the photographs in Erwin Olaf’s latest series, Fall, evoke a strange kind of aloofness. The portraits are interspersed with still lifes of plants and flowers in simple ceramic vases. With its use of colour, the strange, almost awkward expressions on the faces of the models and the almost unreal setting, the series Fall is in some ways the logical successor to the earlier series Grief, Hope and Rain. This autumn, all four will be on display together for the first time in a retrospective at The Hague Museum of Photography. Though the adolescents in the photographs in Fall (2008) have the stylised perfection so characteristic of Olaf’s work, they are not perfect examples of our current ideal of beauty. Their curious expressions are determined to a large extent by the fact that the images were taken as they were blinking. This makes it unclear what the models are actually feeling, what their real emotions are. The combination with still lifes of flowers and the title of the series highlight what may very well be the key theme of Fall – the transient nature of beauty. The exhibition in The Hague Museum of Photography will be the series world premiere.

While Erwin Olaf (b. 1959) was previously known for his hedonistic photographs of extravagant partygoers or people as actors in flamboyant baroque settings, nowadays the common themes in his work are serenity and fragility, as the four series in the exhibition clearly show. His palette is reminiscent of the 1950s, as is the environment in which the people – and plants – are pictured.

The images in Grief (2007) raise all kinds of questions. We see people, some of them crying, others staring out through the windows of a 1960s interior. What has happened? What has befallen these people? The subject of Hope (2005) and Rain (2004) is the American stereotype. In almost surreal Technicolor settings we see stereotypical figures like a boy scout, cheerleaders and a housewife, often with an apathetic look in their eyes that raises more questions than the picture can answer. There is something endearing about the figures who populate these photographs, as if they were completely at a loss, about to beg us for answers.

The series consist of scenic photographs, portraits and video works, all of which will be included in the exhibition. The works will be shown chronologically, showing how Olaf’s work has developed in his recent series. A process that begins with the first sources of inspiration for Rain, the anecdotal, narrative visual language of American painters like Edward Hopper and Norman Rockwell, and culminates in a pure ‘Olafian’ representation: hideous, grotesque, captured in an extremely elegant yet deceptive ambiance.

Erwin Olaf is not only photographer but also film maker. At a special evening that arthouse cinema Filmhuis Den Haag is planning in association with the retrospective, some of his most recent films will be shown. Aperture is publishing a book (price EUR 49.95) to accompany the exhibition, incorporating the first three series of photographs, as well as an extensive discussion of the films belonging to the series, including stills and a DVD. After The Hague, the exhibition will move on to the Institut Neerlandais in Paris (May 2009).