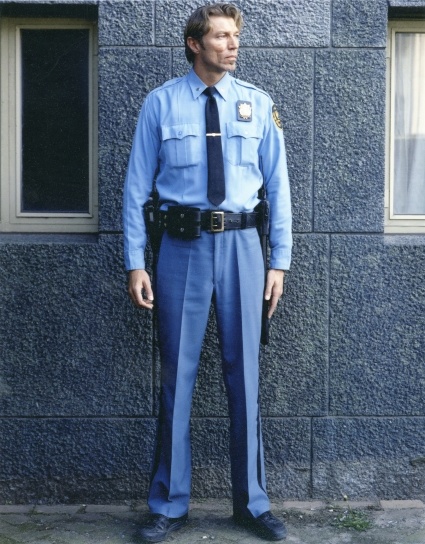 The International Criminal Tribunal for the former Yugoslavia (ICTY)

Best-known for his portraits of leading actors, musicians and writers, Friso Keuris (born 1963) is also the only photographer ever to have had the chance to produce a series of pictures of the Hague-based International Criminal Tribunal for the Former Yugoslavia. Over a period of two years (from October 2001 to October 2003) he produced fifty photographs, both interior shots and portraits, conveying a detailed personal impression of the Tribunal.

Keuris has revealed aspects of the Tribunal which would never otherwise have seen the light of day. His photographs show the building in all its facets, from its exterior, entrance and press office to the very witness stand. They also record a range of Tribunal staff, including not just the Prosecutor, Carla Del Ponte, but also a translator, a trainee on work experience and a UN security officer. The ultra-sharp focus, bright colour and sense of stillness in both the portraits and the interiors give a tangible sense of the – invisible – tension and gravity of the Tribunal proceedings. The 1991-1995 civil war in Yugoslavia involved widespread serious violations of human rights. It was this that prompted the decision by the international community to establish the Tribunal halfway through the war. Located adjacent to the Hague Museum of Photography, the Tribunal is now engaged in prosecuting and trying people accused of war crimes, sentencing them, and attempting to prevent further violations of international humanitarian law. It is the first international war tribunal to have been set up under the banner of the United Nations. The best-known case brought before it is that of Slobodan Milosevic (the former President of Serbia). Friso Keuris was initially motivated to take this series of photographs by dissatisfaction with the one-sided picture of the Tribunal being disseminated by the UN. He also wants to underline the historic importance of the Tribunal. Government leaders and other people responsible for war crimes have rarely been called to account. The few occasions on which they have been brought to court are milestones in the history of justice. The fact that Friso Keuris has been able to address this subject over a period of two years has enabled him to create a memorable and moving picture of the Yugoslavia Tribunal. This winter the Hague Museum of Photography presents a representative selection of photographs from the series. Look at www.frisokeuris.com