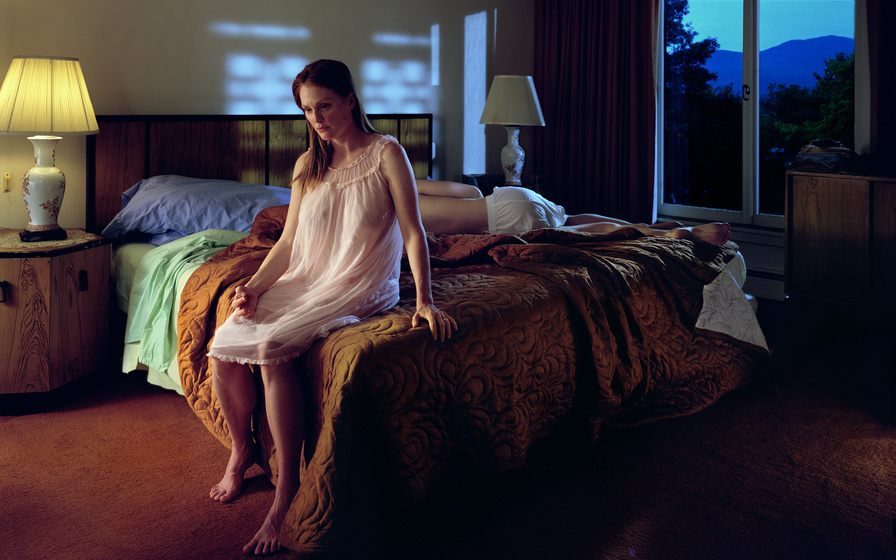 Since the mid-eighties, Gregory Crewdson (b. New York, 1962) has created six carefully staged photo-series in which he presents the world as an obscure cinematographic dream. Against the background of suburban America, he explores the fears, neuroses and desires that are deeply rooted in everyday modern life. In Crewdson’s complex and mysterious worlds, the inexplicable plays a crucial role. The Hague Museum of Photography presents the first selection of his intriguing photo-series ever to be shown in the Netherlands. Gregory Crewdson uses constructed backgrounds and digital manipulation to blur the distinction between reality and fiction. He upsets all our traditional ideas about truth and reality in photography. His hypnotic pictures are the result of a lengthy process involving a large team of stylists, lighting experts and specialists in computer graphics. Made partly on location and partly in the studio, they can best be compared with stills of dramatic scenes in feature films. Not surprisingly, Hollywood classics like Steven Spielberg’s Close Encounters of the Third Kind are a major source of inspiration for Crewdson. In his work he explores the narrative powers of photography: how much of a story can be compressed into a single image? Another important source of inspiration lies in Crewdson’s youth. As the child of a psychotherapist working from home, he soon learned that each individual experiences reality in his own way. Even though, after a short period as a psychology student, he soon turned his attention to a full-time career in photography, his interest in human perception has remained. By creating a different reality in his photographs, he hopes to give the viewer a moment’s experience in which the surrounding world is, for an instant, entirely forgotten. Crewdson’s early work from the period between 1986 and 1988 concentrates principally on the home as a seedbed for loneliness and unfathomable desires. The ‘Natural Wonder’ series (1992-1997) reflects his fascination with the magic of nature. In the monochrome series ‘Hover’ (1996-1997) he used a crane as a vantage point to photograph peculiar scenes in American suburbia. His third series, ‘Twilight’ (1998-2002), which brought him to international attention, featured disquieting scenes in a domestic setting. In ‘Dream House’ (2002), he placed film stars – such as Julianne Moore, Gwyneth Paltrow and Philip Seymour Hoffman – in an uninhabited house that had remained untouched since the death of the woman who owned it four years earlier. He calls these cinematographic photos ‘single framed movies’. But Crewdson has made his greatest artistic and technical progress in his most recent series, ‘Beneath the Roses’ (2003-2005), for which he blocked off whole streets and burned down empty houses. The exhibition is a production by Kunstverein Hannover and is accompanied by a lavishly illustrated bilingual English-German catalogue entitled Gregory Crewdson, 1985 – 2005 (published by Hatje Cantz, price € 45).