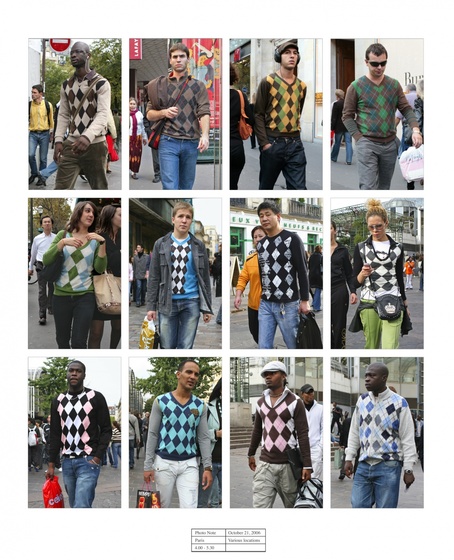 This autumn, The Hague Museum of Photography will be staging a major retrospective of the work of Hans Eijkelboom. Over the past 40 years this artist and photographer’s work has been a continual exploration of the structure and interpretation of identity. His best-known work includes his photographic series featuring unsuspecting people walking along shopping streets in the major cities of the world. Identities 1970 – 2017 will feature work ranging from his early career in the 1970s to his most contemporary street photography, including a new series on shoppers in The Hague.

For more than 25 years Hans Eijkelboom (b. Arnhem, 1949) has been photographing the restless crowds that pass through city centres.  With his camera at chest level, he goes looking for commonalities and resemblances in the appearance and behaviour of chance passers-by.  In the resulting series of snapshots, you are first struck by the similarities: green parkas with blue jeans, short denim skirts with black leggings, Rolling Stones t-shirts, and sleeveless checked shirts. Only gradually do you notice how much effort everyone has put into finding a distinctive combination or some other way of adding their own twist to the current fashion. This body of work, which by now consists of almost 6,000 Photo Notes, shows how difficult it is to fulfil our desire for individuality within the framework of consumer society.

In the 1970s, when a young Eijkelboom was just embarking on his career, conceptual art was still in its heyday. Rather than focusing on the material execution of a work of art, the artists in this movement underlined the importance of the concept and idea. They rejected the more traditional view of art, which starts with the object itself. By extension, some artists also questioned the notion of high and low art.

Photography was an important medium in these developments. Snapshots made their entry into the world of art, enabling artists to devote minimal attention to the actual material production of the work. Hans Eijkelboom was greatly influenced by conceptual art. His debut was at the famous Sonsbeek exhibition in 1971, which included work by conceptual artists like Carl Andre, Robert Smithson and Ed Ruscha.

Eijkelboom was himself often the subject of his early work. For With My Family (1973), he asked mothers with two children to sit with him on the sofa for a photograph. The result is a series of ‘family snapshots’, each of which looks authentic, but when seen together they raise questions about how easily the father can be replaced in a family.

For the Beautiful series (1979) Eijkelboom explored outsiders’ prejudices about each other. He asked a random passer-by to point out a ‘beautiful’ person in the street. He then made a portrait of the person in question, and asked him or her to do the same. The series ends when the subject of the photograph cannot find anyone they think is beautiful.

Much of Eijkelboom's work has been published in photo books. His best-known books include In de Krant ('In the Newspaper', 1978), which consists of newspaper photos in which Eijkelboom can be spotted in the background, 10-Euro Outfits (2010), with thirty self-portraits in outfits that cost 10 euros at most, and People of the 21st Century (2014), a collection of his Photo Notes made in fifty different cities. In the Hague Museum of Photography, you can see the original works reproduced in these books.

This year Eijkelboom's work will also be on display at Documenta 14. Until 16 July, the National Museum of Contemporary Art in Athens exhibited his work The Street & Modern Life. This series of portraits of shoppers and other works will be shown in Kassel until 17 September.

A catalogue in English, Dutch and German, entitled Photo Concepts 1970 -> will be published to accompany the exhibition in Fotomuseum Den Haag. It will contain an overview of more than sixty works and photographic series by Hans Eijkelboom. (Snoeck Publishing)

The exhibition has been organised in close collaboration with Die Photographische Sammlung/SK Stiftung Kultur in Cologne, and with financial support from the Mondrian Fund.

The Hague Museum of Photography is also grateful for the support of its Chief Sponsor, the renowned Dutch law firm of Pels Rijcken & Droogleever Fortuijn, and the Erik Bos Fund.