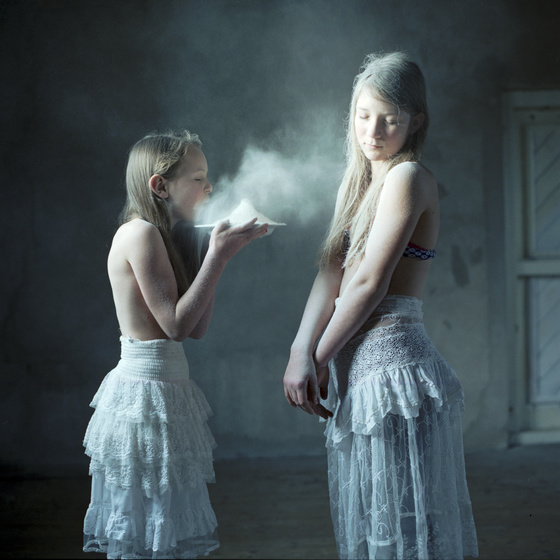 For the last 20 years, Hellen van Meene (b. 1972) has ranked among the world’s top photographers. Her highly distinctive style and timeless, intimate images of young girls on the brink of adulthood have attracted international acclaim. Solo shows and group exhibitions have won her admirers in places as far away as Japan, Korea and the US. The Hague Museum of Photography now presents the first ever major retrospective of her entire oeuvre.

Hellen van Meene career took off in a big way immediately after her graduation from the Rietveld Academie (Amsterdam) in 1996. Following various group exhibitions and a solo show at the Paul Andriesse gallery in Amsterdam, her international breakthrough came with a solo exhibition at the Photographers’ Gallery in London. Since then, her work has been acquired by major museums in the Netherlands and around the world. Collections in which it can now be found include those of the Gemeentemuseum Den Haag, Victoria & Albert Museum (London) and MoMA (New York).

Although Van Meene has continued to develop and her choice of subject has widened over the past twenty years, her work has always displayed the same consistent and distinctive personal style. Whatever the nature of her photographs - whether autonomous art works, images commissioned by the New York Times or Tank Magazine, portraits of young girls in Tokyo or Los Angeles, or portraits of dogs – each of them is always and unmistakeably ‘a Hellen van Meene’.

Van Meene’s unique style is characterized by the timeless and mysterious atmosphere in her images and by her consistent use of natural light. Due to the crucial importance of lighting in her photographs, but also because of the particular way she stages her pictures of adolescent girls, her work is sometimes compared with that of major painters of the past, from Botticelli and Velázquez through to the Pre-Raphaelites of the nineteenth century.

Van Meene draws her models – often young girls – from her immediate social circle or spots them in the street. She doesn’t care who the girl is or where she comes from. For that reason, she deliberately refrains from titling her photographs; the identity of the subject is irrelevant. The photographic image represents a mere moment in time, carefully staged by the photographer; the subject may look quite different the next day – especially if she is a girl in an ‘in-between phase’, hovering on the brink of adulthood. Time flies by: The Years Shall Run Like Rabbits. What remains is a timeless image that frequently offers no clue as to whether it was produced at the start of Van Meene’s career or just this year.

To underline the intimacy of her photographs, Van Meene presents them in the form of small-format prints, forcing the viewer to come close to see them. The retrospective at the Hague Museum of Photography, consisting of over ninety photographs, is accommodated in six vivid, enclosed spaces. It extends from Van Meene’s earliest photographic works, produced in 1994, right through to her most recent images, never previously seen in the Netherlands.