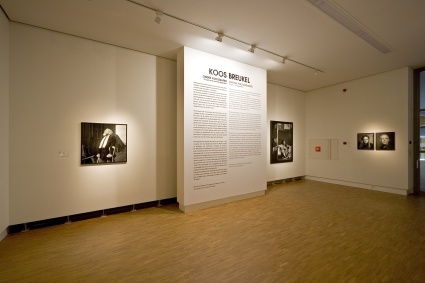 In the course of his career, Koos Breukel (b. The Hague, 1962) has produced portraits of dozens of his fellow photographers, in recognition of them as kindred spirits, sources of inspiration or friends. In this exhibition, Breukel will present a selection of around 55 of these portraits, each paired with a single item from the oeuvre of the photographer depicted. The resulting show will convey a wonderful impression of Breukel’s professional world 'among photographers'. It will include photographs of and by a star-studded list including Richard Avedon, Paul Blanca, Rineke Dijkstra, Ed van der Elsken, Gerard Fieret, Robert Frank, Inez van Lamsweerde, Hellen van Meene, Daido Moriyama and the Starn Twins.

The concept of Among photographers is unusual for the Hague Museum of Photography in that Breukel is curating not only his own work, but also that of fellow photographers. The exhibition will feature a selection of 55 portrait photographs that Breukel has made of other photographers whom he regards as friends or kindred spirits. He has photographed them either in his studio or on location. Indeed, several of the portraits have been made especially for this show at the Hague Museum of Photography itself. To accompany the portraits, Breukel has also chosen one work by each photographer that he finds inspiring or simply beautiful. They range from an exasperated self-portrait of Hague artist Gerard Fieret through to a romantic colour photograph of a Dutch landscape by Han Singels. The distinctive feature of all Breukel’s portraits of fellow professionals is their air of classic simplicity. The power of the intense monochrome images resides above all in their subtle use of light and detailed depiction of the individual. Breukel uses a large format camera and concentrates on the face and upper body of the subject, usually viewed against a plain black background. The use of this traditional plate camera calls for patience and Breukel uses the time to look for the image that exactly corresponds to his intuitive impression of the individual. Breukel feels that people must be free to behave naturally in front of the camera and not be posed. Breukel’s work is always focused on people. Earlier in his career, working for magazines like Elsevier and Quote, he produced portraits of popular musicians, managers and ministers. Not wanting to make conventional pictures of men in suits, he disconcerted his subjects by adopting a confrontational attitude. Since the mid-nineties, he has often chosen to focus on traumatic events in people’s lives. He first came to the attention of the general public with a series of pictures of survivors of the Faro plane crash and a reportage on a friend, actor Michael Matthews (1958-1996), who was suffering from AIDS. Breukel’s series of penetrating black-and-white close-ups revealed the hidden beauty of Matthews’ physical decline. While the forthcoming exhibition will certainly not avoid the themes of disease and death, they will be relieved by pictures of lighter-weight subjects, including numerous portraits of children and animals. The collection of photographs by Breukel and fellow photographers constitutes a wonderful personal record of his professional world ‘among photographers’. The exhibition will be accompanied by a detailed catalogue. Price € 27.50 / Veenman Publishers.