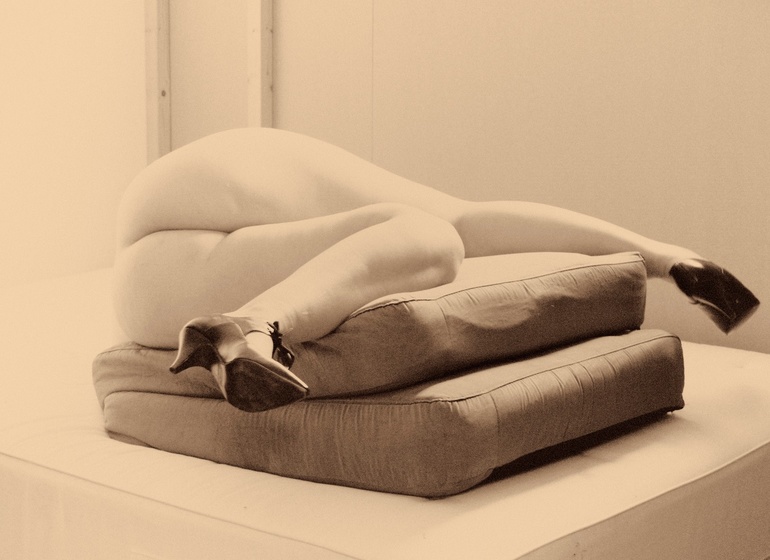 Paul Kooiker is among the most interesting conceptual photographers currently working in the Netherlands. Although his work consists entirely of photographic images, he is not so much a photographer as a sculptor and installation artist. His fascination with intriguing themes like voyeurism, innocence and clichés leads him to construct fictive collections of images that are of extremely uncertain origin, subject and significance. In his latest installation, Nude Animal Cigar, created at the invitation of the Hague Museum of Photography, Kooiker looks back over his twenty-year career in the visual arts. The result is a bewildering array of two hundred photographic works, in which images of nudes and of animals are interspersed with close-ups of the countless cigars he has smoked in his studio over the years.

Paul Kooiker (b. 1964) is not interested in creating the perfect photographic image. The value of his work lies not in his individual photographs (which are sometimes overexposed, blurred by camera movement or grainy), but in what he does with them postproduction – the subsequent process of selection and manipulation. In the initial phase of his creative process he is a deliberately ‘bad’ photographer, producing a mass of exploratory material that often runs to hundreds of images. He then approaches this material as a visual artist, creating ‘collections’ in the form of three-dimensional installations and photo books. These fictive collections look as if they have been found somewhere or have turned up in some ancient suitcase abandoned for decades in an attic. To ensure their credibility, Kooiker pays meticulous attention to internal consistency of form and style. This stands in sharp contrast to the contents of his series, which are often enigmatic and vaguely disturbing.

Paul Kooiker studied at the School of Photography in The Hague and the Rijksakademie van Beeldende Kunsten in Amsterdam. In 1996 he won the Prix de Rome and in 2009 he was awarded the A. Roland Holst Prize for his oeuvre. As well as exhibiting widely in the Netherlands and internationally, Kooiker has devoted considerable attention to the publication of his work. In the final part of this exhibition, he displays multiple copies of all the artist’s books he has issued since 1999, mostly in partnership with publisher Willem van Zoetendaal.

Paul Kooiker’s work is described in a recently published Dutch-language book entitled ‘Fotoverhalen’. The volume showcases the photographic collection of the Gemeentemuseum Den Haag and is edited by its curator, Wim van Sinderen. It contains a collection of anecdotes relating to 150 unique photographs from a range of stylistic periods – from Breitner to Breukel and from Araki to Zwartjes. The book is on sale, price €29.50, in the museum shop and all good bookshops in the Netherlands.

The exhibition is supported by Mondriaan Fonds.