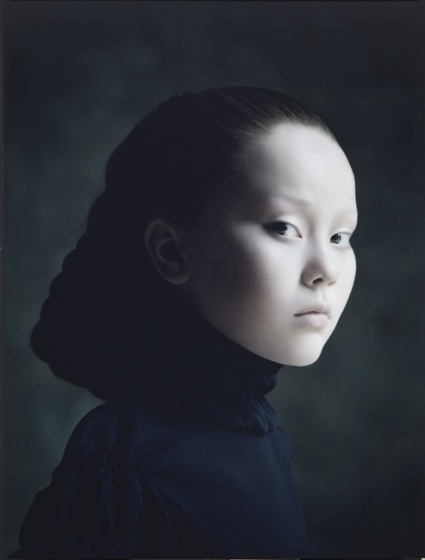 Desiree Dolron (b.1963) is well-known both for her penetrating travel reportages and for her staged photographs. She is internationally reputed to be one of the most successful Dutch photographers in the world today. Both the Guggenheim Museum in New York and the Victoria & Albert Museum in London have recently purchased work by her. The Hague Museum of Photography is about to present the first ever major retrospective of her work.

Over the 1991-1999 period, Desiree Dolron took documentary photographs of religious rites in countries as far apart as India, Thailand, Morocco and the Philippines. In 2000 these were published as a collection in a book entitled Exaltation. Images of Religion and Death. The Hague Museum of Photography will now show a selection of the photographs from this book in the first of its exhibition spaces. The second space will be used to exhibit Dolron’s extremely atmospheric 2002 reportage on Cuba. Works from her ‘Xteriors’ and ‘Gaze’ series (the latter composed of photographs of people under water) will also be on display in the museum. Although Dolron does not deliberately ignore current events in the communities she visits, her photographs cannot be described as journalistic. Her reportages are not continuous narratives, but strings of discrete moments selected for their power of expression and atmosphere. Both in her monochrome photographs (low-contrast, soft in focus and printed in sepia tones) and in her colour pictures (the tonality of which is just slightly non-standard) Dolron harks back to the pictorialism of the early 20th century. This gives her work a painterly quality and aura. When the photographer is not away on her travels, she works principally on projects examining the tradition of the portrait genre. The constraints imposed on the subjects of such photographs seem to be a recurrent theme in her work. In her ‘Xteriors’ series (2001 – the present), Desiree Dolron reveals her devotion to art history by giving her anonymous models a hint of a resemblance to the works of the Flemish Primitives and Johannes Vermeer. In images which, thanks to her control of light and subtle digital manipulations, hardly look like photographs at all, she produces a masterly approximation of the serenity and sense of mystery with which these painters imbued their work. Desiree Dolron’s work is well-represented in the Rabo Art Collection and this exhibition is being organised in close collaboration with Rabobank Nederland. The exhibition will be accompanied by a book issued by Terra publishers and authored by Charlotte Cotton and Wim van Sinderen (€ 49.50, ISBN 90 5897 348 4).  Further information can be found at www.desireedolron.com  The Rabo Art Collection is one of the leading corporate art collections in the Netherlands. To mark its tenth anniversary, an exhibition is to be held in the Gemeentemuseum giving the public its first chance to see the collection’s many highlights in the context of an overview of modern art in the Netherlands, with the emphasis on the last thirty years. The H x B x D exhibition is a unique cooperative venture between the Gemeentemuseum, the Hague Museum of Photography, the GEM and the Rabobank: presentations in the three museums will encompass the entire area covered by the Rabo Art Collection. The GEM Museum of Contemporary Art and the Hague Museum of Photography will hold concurrent exhibitions of work by living artists. This will involve close collaboration with Dutch artists, some of whom will produce new work especially for the occasion.