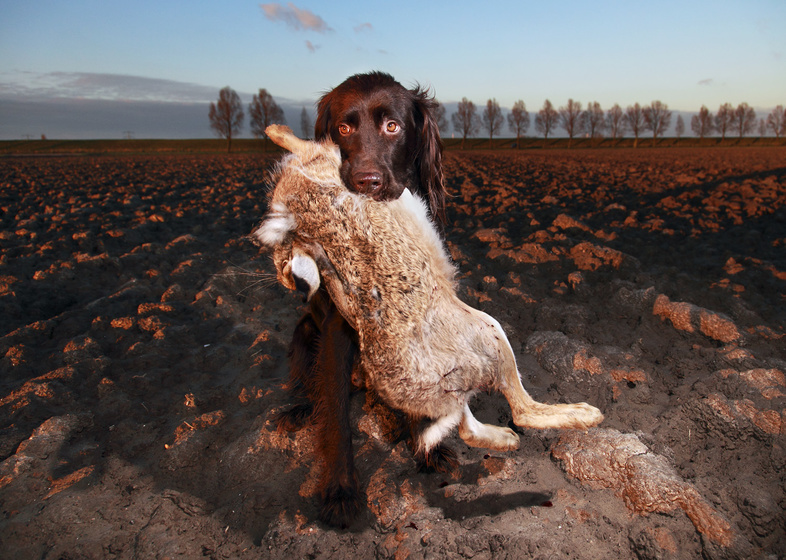 What does the concept of wilderness mean to modern humans? And what does it mean to be part of the food chain in an industrialised society? Photographer and writer Isabella Rozendaal (b. 1983) has been exploring these questions since 2007, following hunters in a range of cultures. She never shies from confrontation: with death, with the human capacity for destruction, with the harsh reality of nature itself, and with her own morals. Rozendaal is not merely an observer; she also takes part. She has taken a hunters’ educational course, and learned to butcher and prepare game. Isabella Hunts at The Hague Museum of Photography is an impressive account of her quest, which over the years has taken her from the Netherlands’ Hoeksche Waard to Germany, the Middle East, the United States and the Brazilian Amazon. Modern practices and ancient traditions highlight the differences and parallels between the cultures behind them.

In the West, pets are often considered members of the family. And when we feel that animals are being treated unfairly – think of the controversy surrounding the overpopulation of large herbivores in the Oostvaardersplassen nature reserve – people protest in large numbers. At the same time, we continue to consume meat and other animal products on a huge scale. The relationship between humans and animals is thus anything but simple. Perhaps that relationship would be entirely different if we were still obliged to hunt for food. Isabella Hunts focuses on this complex issue by exploring hunting practices in the Netherlands and other parts of the world.

‘Shaped by the canon of Golden Age painters and Romantic thinkers, but also by the modern narrative of the nature documentary, I had grown to expect certain things from nature. It played the role of a beautiful backdrop I could saunter along, but never be part of. I was never more than a passive onlooker. The hunter intends to be part of this place, to impact it, to take from it, to ingest it’, says Rozendaal. In order to see nature from a new perspective, she let herself be led by hunters. She went beyond simply observing, also butchering the animals the hunters gave her, learning how to cook them and training as a hunter.

Isabella Hunts shows the many faces of hunting, from trophy hunters and collectors of exotic species to those who hunt in order to feed their family, and everything in between. Rozendaal saw great contrasts and cultural differences. European hunting traditions are a product of old aristocratic rites. In the United Arab Emirates, falconry is an ancient tradition that only exists today because falconers go abroad to hunt, as there is not enough prey left in their own country. In the United States, hunters are shaped by the Romantic, pioneer wilderness ideal, behind which lies a vast commercial hunting industry. For the Nukini people in the Brazilian Amazon, hunting is both a mystical pursuit and a part of everyday life as mundane as going to the store.

Although Rozendaal has not found any unequivocal answers to her questions, one thing has become clear to her: nature and humans, like the body and mind, are not separate entities. ‘Witnessing death is shocking,’ says Rozendaal, ‘but it is also cathartic. To realise that we too are mortal and vulnerable, and all made of the same flesh and blood strikes me as healthy. It puts life into perspective. That is not to say that I don’t still feel conflicted, like any hunter, meat eater or consumer of natural goods does, or should do. We live in a world where human dominance over non-human animals is simply assumed, made possible by powerful ideology, an ideology that differs in every culture, but is the same in essence.’

Isabella Rozendaal graduated from the Royal Academy of Arts in The Hague, and studied English in Amsterdam. During her time as a student she began photographing animals. She has published several photo books and this fall Atlas/Contact will publish her first book as a writer: Op Jacht. In her project Animalia Amsterdam, for the Amsterdam City Archives, Rozendaal photographed over a hundred local pets. Every Saturday one of her pet portraits is published full-page in Amsterdam daily Het Parool. The photobook Isabella Hunts: Photographing Hunting Cultures (ISBN/EAN: 978-90-827221-1-1) will be published on February 16, 2019.